Let me tell you about Holly. When I first met her, a year 12 student at The Regis School, Bognor Regis, and one of the first students to join our #EatLikeAnAthlete programme, Holly had no concept of how food worked, nor of how to cook. Without this basic knowledge, her typical breakfast was a chocolate bar washed down with a well-known fizzy drink. As a swimmer, Holly was quite active and far from overweight, but she suffered low energy levels and, consequently, concentration.

During the course of the #eatlikeanathlete day, Holly's opinion of healthy eating was turned on its head:

"In the morning we learned about slow release carbohydrate, protein and healthy fats, making oaty pancakes, chicken kebabs and guacamole. I wouldn’t have done that before. I just didn’t think that cooking healthily was something that I could do. I certainly didn't think that it would taste so good! I was also really surprised about the content of some of the foods and drinks I have on a daily basis."

Inspired by the course, Holly took on an ambassador's role. This involved leading courses to teach what she had learned to younger children in the school and she was acutely aware of the impact she was having on these children. "If I tell one of them that certain foods are good for you, they really listen, much more than they would if a teacher or parent told them". Holly also brought her new-found knowledge home with her, encouraging her family to cook more from scratch and teaching them about the benefits of foods which would help sustain energy levels.

Teaching about healthy lifestyles should not stop at the school gate

Bingo! That's exactly what we had set out to achieve. Teaching children about healthy lifestyles can so often stop at the school gates. Getting this message out to the wider school community will have a much greater and sustaining impact.

Would you put unleaded into a diesel car? The use of role models

Put the wrong fuel in a car, it won't work. Our bodies are no different. It's a simple message. Using role models, in our case, peer role models like Holly, sporting role models, such as our young ambassador, 20 year old GB pole-vaulter, Lucy Bryan, as well as well-known sporting role models, such as Usain Bolt to help demonstrate the inextricable link between what we eat and how we perform, has had, in our experience, a more profound effect than telling a child to eat something because it is 'healthy'. The children buy the 'sizzle' rather than the 'sausage', so to speak.

A tall order for schools

Scary stuff perhaps, but our children's generation is currently on course to be less fit and healthy than ours. According a 2014 ukactive report "Stay Young, Stay Active" it now takes a child an average of 90 seconds longer to run a mile than it did for their counterparts 30 years ago. With the latest Ofsted directive stating the need for children to have “knowledge of how to keep themselves healthy” and “make informed choices about healthy eating, [and] fitness”, this approach of integrating good eating with an active lifestyle is ever more apposite. Schools now have the onerous task to fulfil this remit.

Once Holly had gained an understanding of how food worked, she saw a marked improvement in her mood and her concentration. She had more energy, started to be more active and really enjoy her swimming. Most importantly, she felt better equipped to make healthier future lifestyle choices. Although the path to achieving a healthier nation is a highly complex one which needs action from all layers of society, from government and the food and fitness industries, to schools, communities and families, if every child were given the opportunity to leave school with the knowledge and experience that Holly had gained, we would be making a step in the right direction.

Thrilled to Announce our Link with Youth Sport Trust

"Hands up who's had breakfast today?"

Referral unit pupils learn how to"eat like an athlete".

Back to School Breakfasts

Thrilled to Announce our Link with Youth Sport Trust

"Hands up who's had breakfast today?" 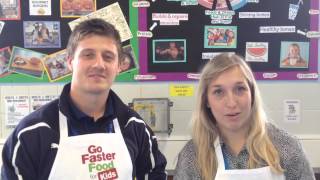 The Ridgeway School Learn To Eat Like An Athlete

Rotary Young Chef of the Year